** Parts of this entry have been adapted from a post on rules vs. discretion by Jason Buol and Mark Vaughan, published by the Federal Reserve Bank of St. Louis.

The debate between rules and discretion in economic policy was first introduced in 1936 by Henry Simons in a paper titled Rules Versus Authorities In Monetary Policy.

Later, Milton Friedman extended the argument, noting that real-world policy-makers have imperfect information and imperfect tools; so, even the best-intentioned attempts to combat fluctuations could end up destabilizing the economy. Today, the topic continues to be heavily disputed.

In this section, we'll briefly summarize the advantages and disadvantages of both rules-based and discretion-based systems, and then describe Amples in context.

Let's start with the example of a discretionary flood policy: 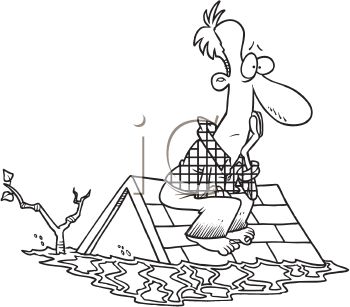 Policy-makers do not want people to build homes in floodplains. To discourage such building, they announce that anyone suffering flood damage is on his own—no disaster relief will be forthcoming.

People ignore these warnings and build anyway. Then, the rain comes, the water rises and the homes flood.

This result offers the worst of both worlds—homes are destroyed by floodwater, and victims who ignored warnings are indemnified with taxpayer funds.

After the floodwater has receded and the disaster checks have gone out, the cycle starts all over again. How can policy-makers avoid this trap?

In a discretionary framework, policy-makers have wide latitude to design the best policy response for the given circumstances. In the flooding example, discretion means that policy-makers are free to craft disaster-relief policy as they see fit in each period.

Today, before flooding has occurred, they can try to discourage floodplain construction by forswearing disaster relief. Tomorrow, if flooding occurs, they can renege and provide generous compensation for damages.

Proponents of discretionary policy note that such flexibility allows policy-makers to respond to unforeseen scenarios. Suppose, for example, a river that seldom floods rises above its banks and sweeps away homes. Under a discretionary regime, policy-makers would have the flexibility to bail out innocent victims. Under a “no bailout, period” rule, all flood victims would be on their own.

In a rules framework, policy responses must follow a pre-specified plan. The plan can be non-activist in nature—the rule may force policy-makers to pursue the same course of action in all circumstances.

Or the plan can be activist in nature—the rule may direct policy-makers to respond to different circumstances in different pre-determined ways. The common denominator is that rules are supposed to constrain policy-makers’ actions in advance. In the flooding example, a non-activist rule might say: “no flood relief, period.”

An activist rule might limit flood relief per victim to 10 percent of the pre-flood value of damaged property—no matter where it is located (floodplain or no floodplain). This rule allows a policy response to the flood, thereby making it activist in nature, but that response is pre-defined.

Thinking about the tradeoffs between rules and discretion-based policies, in a classic 1977 paper Economists Finn Kydland and Edward Prescott introduced a distinction between time-inconsistent and time-consistent policy.

For example, the long-run goal of flood policy is to prevent building in floodplains. In the short run, however, compassion dictates bailing out victims—even those who failed to heed warnings.

If, somehow, threats of no relief could be made credible, people would think twice before tempting Mother Nature. And no floodplain construction today means no need for flood relief tomorrow—a time-consistent outcome.

In 2003 Ben Bernanke introduced the concept of "constrained discretion" claiming that there exists a middle ground that allows policy-makers to respond to shocks while keeping inflation low and stable.

As stated above, the Ampleforth network employs a strict rules-based policy. However unlike the policies investigated in the classic rules vs. discretion debates, Amples live outside the central-banking system and can co-exist with existing policies.

Next: Inside vs. Outside Money